Spring In Vancouver: Sun Damage And Choosing The Right Sunscreen 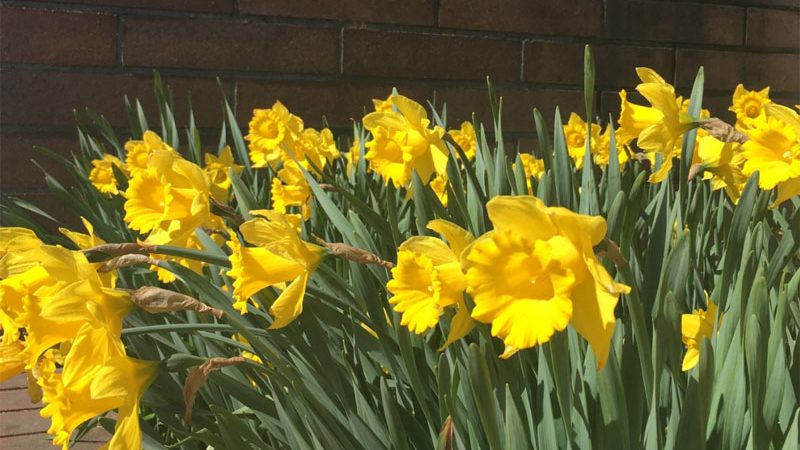 The equinox has passed and we are officially in spring. Daffodils turn their faces to devour the sun.

The cherry blossoms are exploding on the streets of the city, bursting with pent up energy from being at least a month late because February was so cold for so long.

Spring came in with a blast last weekend. I was on the Thompson Plateau, skiing at Stake Lake for a few days. It started off on the Saturday with overcast skies and still cool, but temperatures rose quickly and skies cleared so that within a few days the trails’ base was beginning to “rot out”, what I have always called it when the snow no longer freezes at night and the whole pack begins to soften and melt. 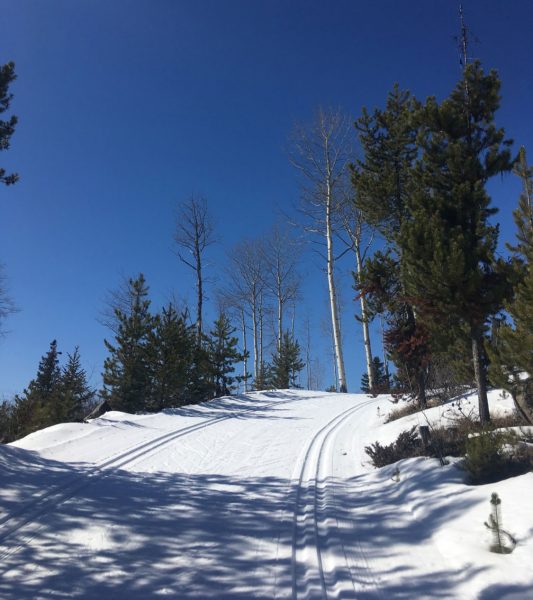 It was up in the high teens by Tuesday and of course, Vancouverites were beginning to wear flip flops and shorts.

Every year people go out onto the snow and at altitude and get burned, worse than they get it on their beach vacations. Blisters and lobster red faces are too common, as is the expression I still hear, “I burn once and then I’m good for the season”.

And the same damage occurs on the water beginning perhaps a little later in the year, on the tennis courts, and eventually on the beaches. But the worst is on the snow and at altitude.

Tanning is what is done to hides to make them into tough leather.

Consumers spend huge amounts of money on “anti-aging medicine”, Botox, fillers, anti-oxidants, detoxifiers, to say nothing of all the over the counter cosmeceuticals.

The most important influence on the appearance of aging of the face is genetics, but second is environmental damage, mainly tobacco and sun damage. With tobacco use on the wane, the main issue here in B.C. we see is sun damage (I’m only going to mention skin cancer. I”ve cared for thousands of cases in my practice).

A few weeks ago I was on my way to Hollyburn to get my XC ski for the morning and realized I’d rushed out before putting on my screen. So I stopped at Park Royal thinking their Shopper’s Drug Mart would have a decent selection of sunscreen.

But first, I need to explain a little about sunscreen. Basically, there are two kinds, chemical screens and physical barriers. This article in the Huffington Post explains it well:

“The chemical ones are … absorbers whereby UV rays enter the skin, are absorbed and come out usually as infrared rays…The physical ones are reflectors and they do just that: they form a protective layer on the skin and reflect those UV rays. Sunscreens can and do include both of these types of ingredients.”

I think there are two main kinds of users.

High-intensity sports participants want screens that don’t need constant replacement with sweat and water exposure. Examples are skiers, sailors, board sailors, and kiteboarders. These people generally have no qualms about having a thick, possibly visible, sunscreen because everyone acknowledges when you’re out there, you need all the protection you can get. But physical sunscreens have gotten better at disappearing on the skin and are nowhere near as conspicuous as they used to be. “Nano” technology seems to be the key factor there.

Most people, however, are told sunscreen is necessary and to apply it every day to prevent aging changes and skin cancer, but hopefully at least when on beach vacations. They don’t want it visible and the sooner signs of it disappear after application the better. These people want the latest in chemical sunscreens.

I have always believed physical screens are more effective in the intense radiation of northern Canada, or when I’ve been in Patagonia, altitude and snow, water sports. If I went elsewhere in the tropics I would do the same, but that’s me. When we skied in the spring in the late 60s and 70s as youngsters, Zinc Oxide cream, that visible white smear, was the only thing that gave adequate protection, and it was no fun having your face blow up in radiation blisters, something we’d all had or at least seen. I also until recently have been under the impression they cause less damage to coral reefs. Now, there’s some doubt about them, too, I’ve just read in this Smithsonian article.

Back at Shopper’s Drug Mart, and all I could find was a display with products from the biggest labels, and all chemical sunscreens. No zinc or titanium oxide on any of the labels (which were printed in such small type it practically required a microscope to read). They’re all pretty much the same kind of products, all packaging and marketing… 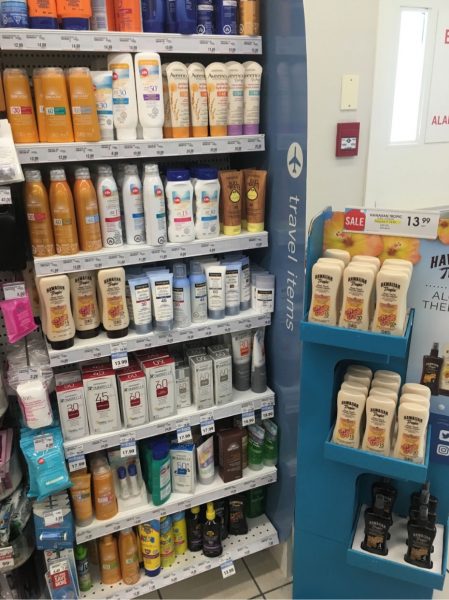 In their cosmeceutical counter was a 50 SPF in an imported brand physical barrier. I won’t reveal which I bought.

My advice is, whatever you choose to use, put it on, and thickly (you are supposed to put it on thick enough to see it for a while regardless of whether it is physical or chemical). 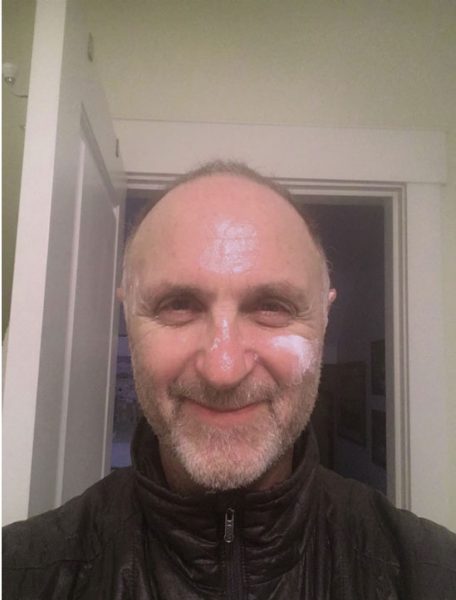 A photo from last Saturday morning. I’m obviously not very good at “selfies”.

There are good products available at swim shops, and if you are going to the beach locally here in Vancouver, there are several along 4th avenue. Similarly, for example, in White Rock.

Of course the least toxic-to-reefs and most protective is clothing; some very comfortable protective gear is available. Maybe in some circles, it might look good enough on you to be considered sexy, but I wouldn’t buy it with that in mind: 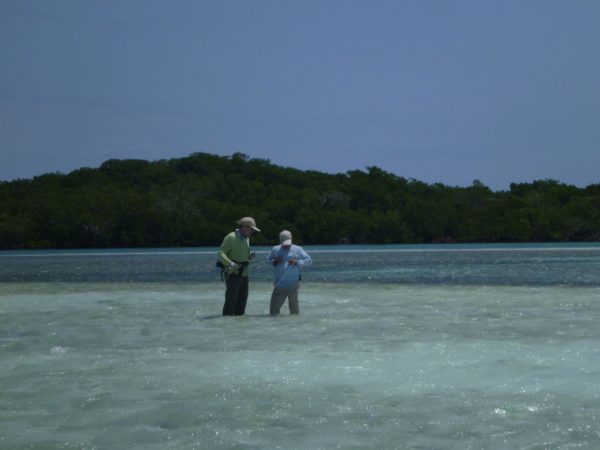 Have fun spring skiing, on the water, or at the beach. Take care of your skin.

Here’s what I’m doing for exercise:

Homemade pizza (it’s the perfect food). It takes time to make the crust and there is a constant search for improvement but such a pleasure. 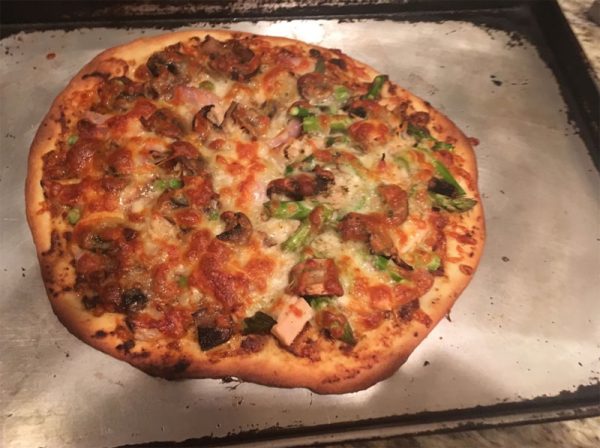 Instead of canned tomato paste I rehydrate a few sundried tomatoes, add some olive oil and some dried basil (in the summer, fresh) and buzz it in my blender.